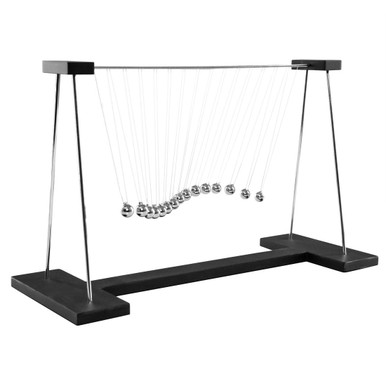 First of all, we have to clear up a misunderstanding: this pendulum is not the bigger version of Newton's Cradle. The Pendulum Wave doesn't demonstrate the rules of momentum and energy, but rather the dependence of the oscillation period on the length of the thread.

All 15 balls on this pendulum have different thread lengths, which results in every single ball having its own periodic time. This way, they create the optic illusion of a wave, which becomes more and more difficult until it goes back in line again. Just have a look at our video on the left for a first glimpse. :)

All that's left for you to do is to push all the balls at the same time. That's easy with the included pushing bar (Trust us, this is a highly technical term...). Don't throw it away while unwrapping, it's more than just a filler! The bar is made from the same material as the construction itself and fits between the base plates.

The Pendulum Wave is yet another proof that science can be beautiful, not just in the eyes of geeks and nerds. And as an added entertaining bonus, everybody who doesn't know the Pendulum Wave yet will try to push the first ball - just like Newton's Cradle.

This product hasn't received any reviews yet. Be the first to review this product!

Write your own product review

All prices are in USD.